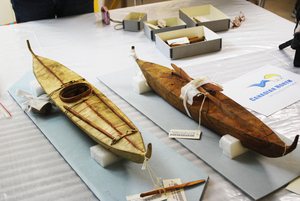 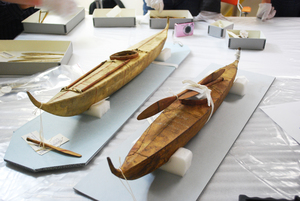 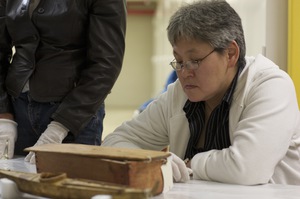 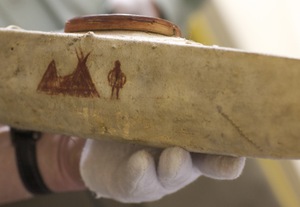 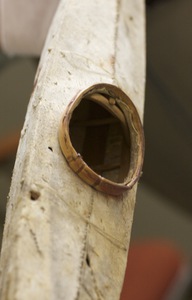 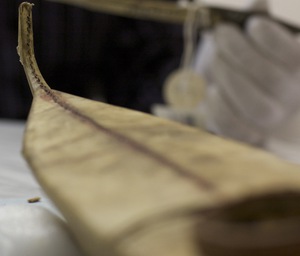 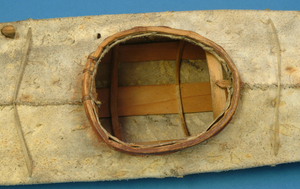 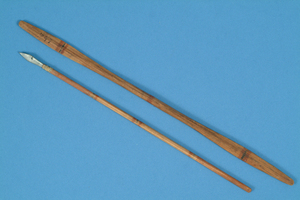 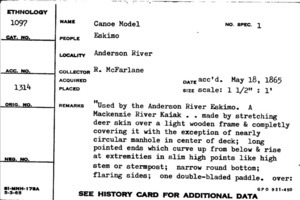 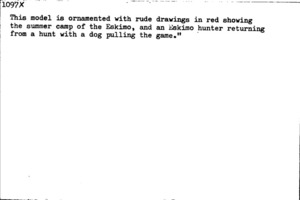 Model of a kayak with prominent upturned ends that are distinctive of Inuvialuit kayaks. It has a frame made from wood components joined by lashings and mortise and tenon joints, and a cover made from several pieces of hide stretched over the frame and stitched together. Deck lashings made from sinew for holding hunting implements are attached fore and aft of the cockpit. On each side of the model is a drawing made using red ochre. One drawing illustrates a camp scene with a person standing next to a tent, and the drawing on the other side is a hunting scene with an individual holding a harpoon and a dog dragging a seal. The model includes a double-bladed paddle and a lance. Both are made of wood, and the lance has a metal tip. The paddle and the lance have been decorated with transverse lines made from red and black pigments.

FROM CARD: "USED BY THE ANDERSON RIVER ESKIMO. A MACKENZIE RIVER KAIAK MADE BY STRETCHING DEER SKIN OVER A LIGHT WOODEN FRAME & COMPLETELY COVERING IT WITH THE EXCEPTION OF NEARLY CIRCULAR MANHOLE IN CENTER OF DECK; LONG POINTED ENDS WHICH CURVE UP FROM BELOW & RISE AT EXTREMITIES IN SLIM HIGH POINTS LIKE HIGH STEM OR STERMPOST; NARROW ROUND BOTTOM; FLARING SIDES; ONE DOUBLE-BLADED PADDLE. OVER: THIS MODEL IS ORNAMENTED WITH RUDE DRAWINGS IN RED SHOWING THE SUMMER CAMP OF THE ESKIMO, AND AN ESKIMO HUNTER RETURNING FROM A HUNT WITH A DOG PULLING THE GAME."