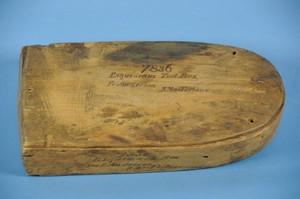 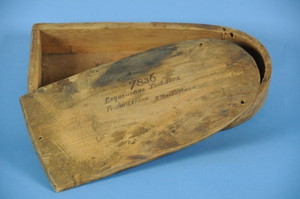 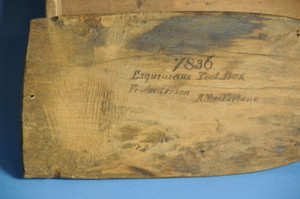 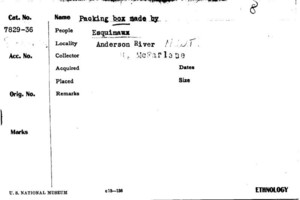 Box made from wood. A long side piece has been bent into a 'U' shape, and has a smaller end piece attached to it with wood pegs. The bottom also is held in place with wood pegs. The lid is loose, but two holes drilled through at an angle near the curved end, and a similar hole at the other end that line up with corresponding holes in the side piece, likely were used for lashing the lid to the side. Grooves in edges of the lid near the straight end that line up with similar grooves on the side piece were probably made to hold a thong that encircled the box. Scratches in the suface of the lid indicate that the box had been used as a cutting board, in addition to being a container. This item is identified in the original Smithsonian Institution catalogue as a 'packing box'; however, the shape follows the traditional design for boxes.