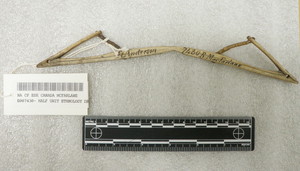 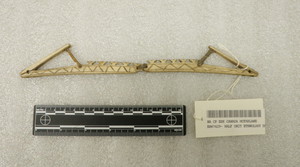 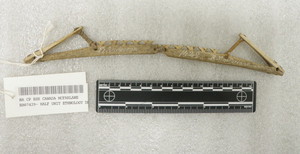 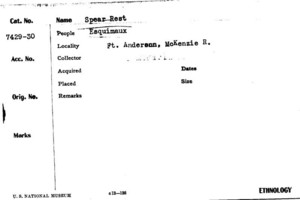 Lance holder for the deck of a kayak. It consists of a two-part centre piece made from whale bone that is hinged at the centre, allowing it to fit against the inverted 'V' shape of the deck of a kayak. The hinge has been created by joining the two parts with a hide thong that passes through a hole drilled through each piece at the joined ends. Smaller pieces made from bone or antler are attached at each end with two iron rivets. The faces of the centre and end pieces are cut aslant where they join so that the end pieces extend inwards and upwards at a shallow angle. A piece of hide connects the inner part of the end pieces to the centre piece by passing through holes drilled in each piece, and then wrapping around itself. A hole drilled through the joints at each end would have been used for mounting the holder to the kayak. The upper edges of the centre pieces have five V-shaped projections, and engraved into one face are a series of parallel and zigzaging lines.