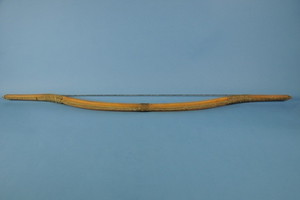 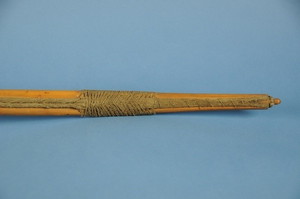 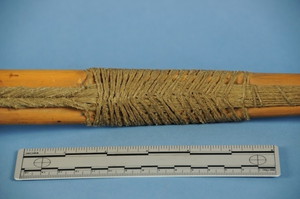 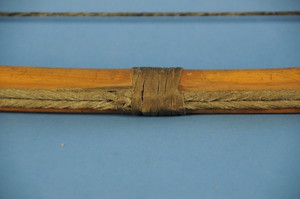 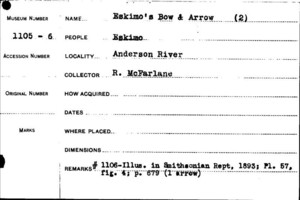 Sinew-backed recurve bow made from a single piece of wood, probably spruce, part of a set that also includes a quiver and arrows. The bow stave is thickest in cross-section at the middle and at the lateral bends where greatest forces are applied, and flattened at other points along its length. It has knob-like projections at each end for holding the bowstring, which is of braided sinew. The braided sinew backing is attached to the back of the bow by a series of hitches at each of the lateral bends, and with a hide thong at the mid-point where there is a piece of hide between the backing and the stave that would have prevented the backing from slipping.

FROM CARD: "#1106-ILLUS. IN SMITHSONIAN REPT, 1893; PL. 57,. FIG. 4; P. 679 (1 ARROW)." FROM CONDITION REPORT FOR HALL 9 TAKEDOWN (C. VALENTOUR 3/98): "SHAPED WOODEN BOW W/ KNOBS AT EACH END LASHED W/ TWISTED SINEW BOW STRING. TWISTED & PLAITED SINEW RUNNING ALONG OUTSIDE OF BOW. RAWHIDE STRIP LASHED AT CENTER OF BOW."Though originally catalogued as a bow and arrows, as of 2005 there are 20 arrows, a sinew cable-backed bow, and a quiver/bow case with the catalogue number