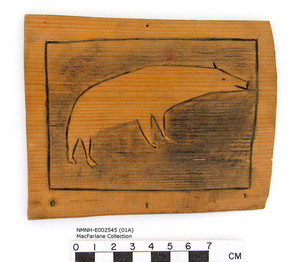 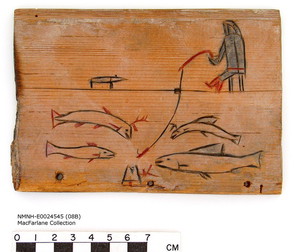 Illustration on a wood plaque, created by incising lines into the surface and then adding red and black pigments, probably ochre and charcoal. The illustration depicts a person, most likely a man judging from the shape of the parka, sitting on a stool and fishing through a hole in the ice. In one hand he is holding a fishing rod with a line attached to it, and at the end of the line appears to be a baited fishing lure. A figure that is likely a dog is standing nearby. Below the ice, which is shown by a horizontal line, four fish appear to be attracted to a fish head used as bait. The sizes of the fish and shapes of the fins suggest that they are burbot (upper left), greyling (upper right) and lake trout (lower right), all of which are common to the area and can be caught on hooks. Two of the fish, and the fish head, have spurred lines attached to their heads, suggestive of antlers.