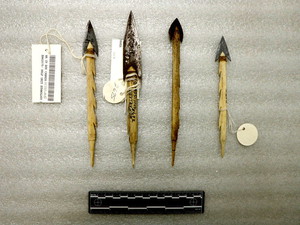 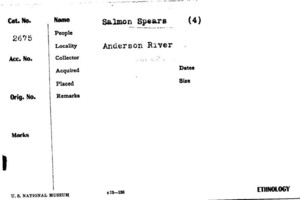 This is a set of four iron-tipped arrowheads. Three are made from bone, and one is made from antler. The body of each arrowhead has barbs along one edge, and each has a conical tang that would have been inserted into the ends of an arrow shaft. The iron tips are held in slots cut into the forward ends of the arrowheads.. The three bone arrowheads have sinew binding compressing the slot, keeping the iron tip securely in place, while the arrowhead made of antler has a rivet running through the slot. One of the arrowheads has two notches just above the tang, which may have been an owner's mark. The Smithsonian Instutiton catalgue identifies these items as tips for salmon spears; however, they are ismilar in size and shape to arrowheads on arrows in the MacFarlane Collection.

Note that 2675 is mentioned as being used in an exhibit in Berlin in 1880 on p. 60 of USNM Bulletin No. 18. Objects are described there as heads of fish-darts, Eskimo, Mackenzie River district.