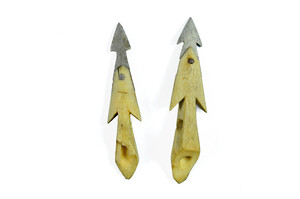 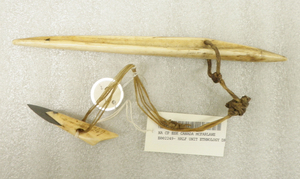 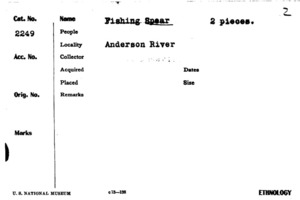 Harpoon head and foreshaft. The head is made from ivory. It has a spur at one end, a blade slot at the other end, and a line hole that passes through the head in the same plane as the blade slot. A trapezoidal-shaped iron blade is held in the slot by an iron rivet. The relatively short foreshaft is made of bone. It is blunt at the end that was meant to be inserted into the socket of the harpoon head, and pointed at the other end, where it would have been inserted into a socket piece. Seemingly, the foreshaft was not meant to swivel in the foreshaft, and may have been made for a thowing harpoon. A length of babiche is looped several times through the line hole of the harpoon head, and is attached to a hide thong that is in turn attached to the foreshaft. These items were originally identified in the Smithsonian Institution's catalogue as parts of a 'fish spear', but the size and style of the harpoon head is consistent with harpoon heads used for hunting sea mammals.