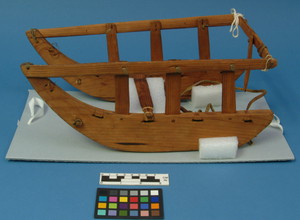 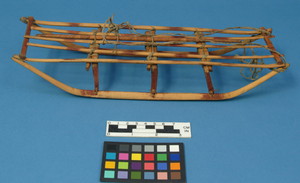 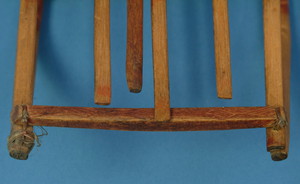 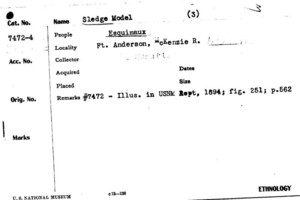 Model of a sled with a raised deck. The runners are upturned at both ends, and each has a slat that forms part of the deck running between the two ends. The two runners are joined by another slat at each end, each of which lies on top of and at right angles to the first set of slats. These transverse slats are attached to each other, and to the runners, by sinew lashings that pass through holes drilled through the slats and runners. The deck is formed from three slats in addition to the two that run from end to end of each runner. The three middle slats are set into slots cut through the transverse slats, and all of the deck slats sit on an are lashed to arches formed from two pieces of wood that rise vertically from the runners and then bend inwards at 90 degrees to hold the deck slats. The transverse slats are decorated with incised lines stained with red ochre, and the sled is also stained with red ochre in various locations. A shaft of a model harpoon or spear is secured to the deck of this sled.

This sled model appears to be similar to small sleds used to transport an umiaq, as shown in a painted wooden plaque (E2545-06B).