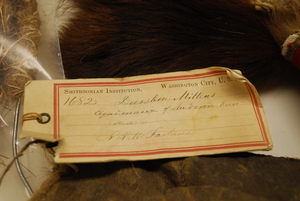 A paper titled “Virtual Repatriation and the Application Programming Interface: From the Smithsonian Institution’s MacFarlane Collection to “Inuvialuit Living History” was just published by team members Kate Hennessy and Charles Arnold, with project developers Ryan Wallace and Nicholas Jakobsen, on the Museums and the Web 2012 Conference site. In the paper we explore the design of the Reciprocal Research Network’s API and how it was leveraged by the Inuvialuit Living History Project team and the Inuvialuit Cultural Resource Centre to create our virtual exhibit.

Our abstract: [Check out the paper here!]

Digital technologies are providing heritage institutions and stakeholder publics with new possibilities for sharing curatorial and ethnographic authority. More than creating access to museum collections, institutional practices of making digital records public have opened spaces for “virtual repatriation” and the production of alternative representations of tangible and intangible cultural heritage. In 2009, a delegation of Inuvialuit elders, youth, cultural workers, and media producers traveled with anthropologists to the Smithsonian Institution’s National Museum of Natural History to view and document the MacFarlane Collection, arguably the most significant collection of Inuvialuit material culture. In the months after the visit, the group worked with Smithsonian curators and developers of the Reciprocal Research Network (RRN) to make the MacFarlane Collection’s digital records available for the Inuvialuit production of a virtual exhibit and archive. In lieu of physical repatriation, the exhibit producers leveraged the RRN’s API (Application Programming Interface) to recontextualize publicly available institutional data as a virtual repatriation of the collection. “Inuvialuit Living History” demonstrates ongoing connections between the MacFarlane Collection and contemporary Inuvialuit knowledge and cultural practice. In the process, new questions are raised about histories of ownership, the possibility of physical repatriation, and opportunities and challenges associated with the digitization and return of cultural heritage.