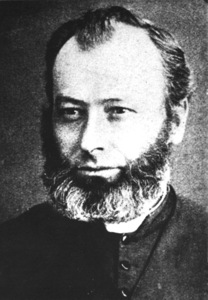 The Inuvialuit were suspicious of Father Petitot, who they called him 'Mitchi Pitchitork' (Mr. Petitot), and must have wondered about his motives. Some even accused him of being a bearer of disease. Nevertheless, Petitot wrote in his book, Les Grands Esquimaux, 'These people are truly hospitable ... hospitality to a stranger under their roof is to them a sacred duty which is never violated'.

Even though he was not trained as an ethnographer, Petitot’s writings arguably are the best available eyewitness accounts by an outsider of the Inuvialuit who traded at Fort Anderson. Many of his observations of the tools and other objects used by the Anderson River Inuvialuit are included in the 'Item Type' descriptions in the Collection section of this website.

(Image of Émile Petitot from 'The Amerindians of the Canadian Northwest in the 19th Century, as seen by Emile Petitot. Volume 1: The Tchiglit Eskimos', edited by Donat Savoie, Department of Indian Affairs and Northern Development. Original in the Archives Deschâtelets, Ottawa).