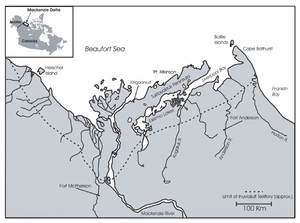 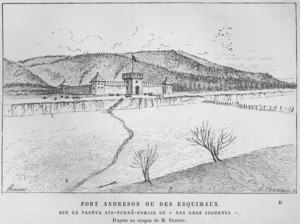 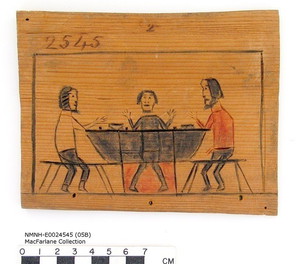 Until the establishment of Fort Anderson, the Hudson's Bay Company obtained their furs from Inuvialuit living in the coastal regions of the western Canadian Arctic at their Peel River Post (later relocated and named Fort McPherson). The post was established in 1840. However, for the first years that Peel River Post was in operation the local Dene - the Gwich’in - discouraged Inuvialuit from trading directly with the HBC, and operated as middlemen in the fur trade. Direct visits by Inuvialuit to the post began in 1853, but continuing hostilities with the Gwich’in and the long distances that had to be travelled limited the extent of the trade with the Inuvialuit.

In 1859, a small group of Inuvialuit travelled from the mouth of the Mackenzie River to the regional HBC headquarters at Fort Simpson to request that a trading post be built in Inuvialuit territory. The HBC agreed, but concerned about the reputation of Inuvialuit living at the mouth of the Mackenzie River being hostile, they decided instead to build the post further to the east. Several years previously, with the idea of extending trade to the Inuvialuit already in mind, the Chief Factor of the HBC, James Anderson, had dispatched Roderick MacFarlane from Fort Good Hope to explore the valley of a river known locally as the ‘Beghula’ (a type of whitefish known today as Inconnu) River that flowed into Liverpool Bay, an area occupied by Inuvialuit.

MacFarlane first travelled to the area in 1857. He encountered Inuvialuit at camps on the river, and proceeded to travel downstream towards its mouth. Before arriving at Liverpool Bay he met a large group of Inuvialuit who had travelled there from the Mackenzie River area who clearly were hostile to him, and he had to flee. Undeterred by this experience, he returned in the winters of 1858 and 1859 to trade with the Inuvialuit and experienced no further difficulties.

In 1860, McFarlane was given orders to establish a trading post on the river that had now been re-named after Chief Factor James Anderson. He chose a location on the east bank of the river in a forested area far upstream of Liverpool Bay for the post. Construction began the next spring, and the post was completed before the onset of winter. Fort Anderson was built with defense in mind. It was surrounded by a square palisade approximately 50 metres on each side, with a raised platform running along the walls on the inside that were attached to a 6 metre-high lookout, or ‘bastion’, at each corner. Inside was a ‘master’s house’, a house for the employees, and two storehouses: one for trade goods, and the other for furs.

Roderick MacFarlane remained in charge of at Fort Anderson after trade with Inuvialuit had commenced. There was a staff of between 4 and 6 people based at the post. Trade goods – primarily tobacco, beads and iron tools - and supplies needed to operate the post were brought in from Fort Good Hope in winter by dog team, and furs were shipped out the same way. For the first few years the number of skins, primarily fox, which were traded justified the expense of operating a remote trading post. However, the optimistic predictions for its success were short-lived.

In the Fall of 1865 an outbreak of measles at Fort Anderson resulted in the death of approximately 150 of the local people. With the death of so many hunters and trappers who were vital to its existence, the HBC ordered MacFarlane to close Fort Anderson, and it was abandoned in June 1866. Years later, Anglican Missionary Isaac Stringer heard from Mackenzie River Inuvialuit that the fort had burned to the ground not long after it was abandoned.