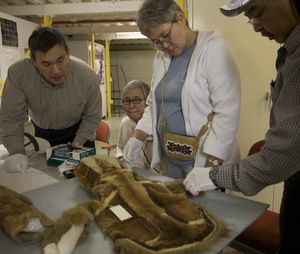 The production of the Inuvialuit Living History Website has included many consultations and presentations in the Inuvialuit Settlement Region. These presentations and field trips, which have been carried out by most members of our team at different times in the last three years, have been focused on creating opportunities for conversations and dialogue about Inuvialuit cultural heritage and the local significance of the Smithsonian's MacFarlane Collection. When our team first visited the MacFarlane Collection at the Smithsonian's National Museum of Natural History, many conversations and stories were shared (you can see this in the documentary 'A Case of Access'). Below, we describe our consultations so far and will continue to add to this page each time we work with the Inuvialuit community to improve the website as a cultural and educational resource. As always, we welcome your feedback! 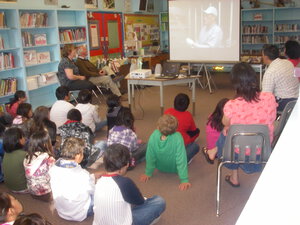 In June of 2010, Project Director Natasha Lyons traveled with Charles Arnold to Inuvik, where they met up with Albert Elias, Mervin Joe, and Catherine Cockney to present the results of our trip to the Smithsonian to see the MacFarlane Collection, and to present a preliminary outline of the website that would become the Inuvialuit Living History Project. Natasha, Albert, and Charles also traveled to Tuktoyaktuk to meet with community members, and to seek their input on the project and the MacFarlane Collection. 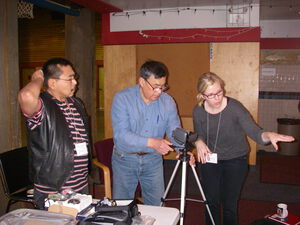 In October of 2010, Mervin Joe, Albert Elias, and Rebecca Pokiak interviewed elders in Inuvik, Tuktoyaktuk, and Paulatuk in the Inuvialuit Settlement Region about the MacFarlane Collection, their knowledge of the objects, and how they would like the collection to be used in the community. Our project team was very grateful to Inuvialuit elders who took time to look at images of objects in the MacFarlane Collection and to tell us about how the objects used to be used, and about their lives out on the land in the Anderson River region. Before this research trip, Albert and Mervin worked with Kate Hennessy, Natasha Lyons, Chuck Arnold, and Joanne Bird in Vancouver to hone their skills in audio and video recording interviews, and cataloguing and archiving media. The information gathered in these interviews was used to help our team re-write descriptions of objects in the MacFarlane Collection on this site.

Albert Elias shares his experience interviewing Inuvialuit elders for the project. February, 2011. Video by Natasha Lyons.Natasha and Mervin drive through the ice roads on a gorgeous sunny day to Tuk to interview more important elders and students. There is about 2 hours left of the drive to Tuk.Mervin Joe and Natasha Lyons drive back to Inuvik and talk about their visit to Tuktoyaktuk. Feb. 2011. Filmed by Natasha Lyons. James Pokiak talks to Natasha Lyons about his experience on the land in the Anderson River region. Tuktoyaktuk, February, 2011.

In February of 2011, Natasha Lyons and Mervin Joe conducted interviews with Elders, community members and school children in Inuvik and Tuktoyaktuk about the MacFarlane Collection and our latest draft of the Inuvialuit Living History website. They filmed a number of video interviews with Elders like Billy and Eileen Jacobson and James Pokiak. They interviewed Rebecca Pokiak about her impressions of the collection and its importance as a teaching tool for Inuvialuit youth. They also talked to teachers like Sharla Greenland and Angela Young about how the Inuvialuit Living History website could best be used in school curriculum and work with educational requirements for the Northwest Territories. This consultation was important for the development of our Teachers' Guide and Lesson Plans, which were created by Myrna Pokiak, with assistance from Charles Arnold.

In the Spring of 2011, our project team, led by Natasha Lyons, published a report detailing everything we had accomplished on the project to date. This report was designed as a community newsletter, and with the support of the Inuvialuit Cultural Resource Centre, was sent to all families in the Inuvialuit Settlement Region. "The Inuvialuit Smithsonian Project: Winter 2009-Spring 2011" describes the years of research and planning preceding the creation of this website, details about the group's exciting trip to Washington D.C. to visit the MacFarlane Collection at the Smithsonian's National Museum of Natural History, and the work that we have done since then. The report was written by Natasha Lyons, Kate Hennessy, Charles Arnold, and Mervin Joe, with contributions by Albert Elias, Stephen Loring, Catherine Cockney, James Pokiak, Billy Jacobson, and Darrel Nasogaluak. You can download a copy of the report on the Inuvialuit Regional Corporation's website. 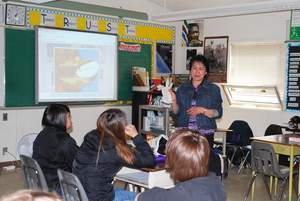 In June of 2011, Kate Hennessy traveled to Inuvik to work with Mervin Joe and Cathy Cockney on refining the latest draft of the Inuvialuit Living History website. Cathy, Kate, and Mervin presented a prototype of the website to students and teachers at Samuel Hearne Senior Secondary School to show them the site and ask for feedback on how to improve the website for use in the school. They also visited with the Inuvialuit Communications Society and Parks Canada, Inuvik, to show them the website and discuss how it could be used in educational programs. Finally, Mervin, Cathy and Kate presented the project at the Inuvialuit Day Celebration. Inuvialuit Day celebrates the anniversary of the signing of the Inuvialuit Final Agreement, and was full of delicious food, drum dancing, and lots of happy faces! They had many good conversations with community members and a lot of good feedback (including constructive suggestions for improvement) for the completion of the website. 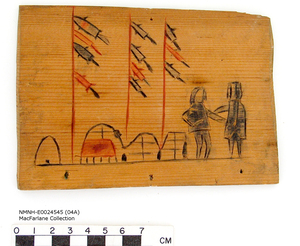 In November of 2011, Mervin Joe and Charles Arnold went on a speaking tour of the Northwest Territories (visiting Fort Smith, Yellowknife, Inuvik, and Tuktoyaktuk), giving a presentation called "Inuvialuit at the Smithsonian, Connecting the Present and Past". The presentations described our trip to the Smithsonian and what we had learned about the MacFarlane Collection. In particular, they talked about how the curatorial research led by Charles Arnold, in collaboration with Darrel Nasogaluak and Joanne Bird, had helped draw connections between objects in the collection and generated new knowledge. They also talked about how this knowledge was being communicated through the Inuvialuit Living History website, and sought comments and feedback on the project as a whole. An article by Megan Wohlberg written for the Slave River Journal reports on the presentation given to residents of Fort Smith.