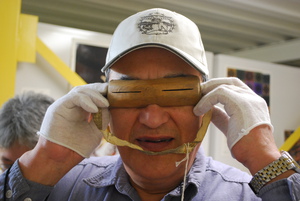 Albert Elias told us about his time in Stanton, at the mouth of the Anderson River, as a boy. This experience is closely connected to his interest in the project:

“Palaiyaq was my grandfather Raddi’s brother, making him my grandfather [in Inuvialuit kinship] as well. He was known to be a good hunter, trapper and provider, a sharp shooter. He adopted my uncle John Raddi, but had no kids of his own. I saw Palaiyaq when I was a kid in Stanton in 1948. Palaiyaq probably came from Kitigaaryuit, and traveled east to trap. He was around Anderson River for a good part of his life. He traveled with Diamond Jenness as a guide and provisioner, so if you read Jenness’s diaries, you’ll find many references to Silas Palaiyaq.

My interest in this project was based on the fact that I spent a winter with my parents at Stanton, on Wood Bay, in ‘48. We built a cabin there. The old-timers, such as the Kimiksanas, Kotokaks, Tardiffs, and Johnson Uqsuasiaq, were there. What struck me as a boy was that their dialect (Siglitun) was old-fashioned. When they talked about something good to eat, like fish or berries, they used the expression ’mamarviksairusimayuq’, referring to really special foods that were really tasty. You don’t hear that expression any more, but my wife and I sometimes use it. When I saw the artifacts in Washington, I was amazed at the similarities with what I saw as a child—I saw that style of clothing and the bows and arrows, made by the old-timers. At that time, they use a lot of metal tools, but they still used some of the old ones too. Another striking thing was the crimping of the toes of the kammak in the collection; ladies don’t do that anymore, as it was done with the teeth. I think the knowledge gathered from this project is important to pass on to our youth, by teaching them through doing: they learn the names of things by watching and doing and trying it themselves. I want to make some of those spearpoints and harpoon heads myself!” 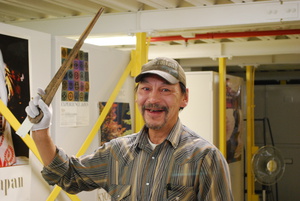 James Pokiak is very interested in the MacFarlane Collection, and has enjoyed being part of this project for a number of reasons:

“Mainly, it’s my interest in how our people managed to survive in those days with just the tools and weapons they had. I’ve always been interested in Inuvialuit culture. All the people that I met out on the Anderson River taught me the basics of bush-life, such as Gordon Agnaviak and my uncle John Kikoak. Gordon first showed me the Anderson River area, how to get around out there, how to build a sod shelter, and how to trap. This started me out on my life as a trapper. I was always interested when the bush trappers were out for the entire season—you waited to see when they would come in and hear their stories. These days, they arrive out at their camp and you hear from them an hour later!” 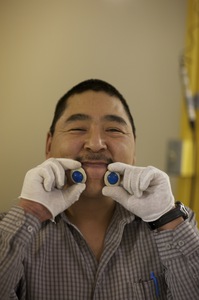 Mervin Joe says: “When I first did archaeology work with Max Friesen on Herschel Island, the first few days were kind of boring, not finding anything. Lower down, I started getting really interested as we started finding artifacts. Since coming to Parks Canada, I continue to do archaeology. I now have some background and experience and know the process of how things come out of the ground, how they get recorded, and how they go into museums. In the North, archaeology projects have to be reviewed by Elders Committees, Hunters & Trappers Committees, and Community Corporations, and sometimes they say that ‘they’re just taking our stuff away.’ I used to think that too, but now that I know the process, and I know how well taken care of the artifacts are in the south, especially those that need special climate-controlled conditions, I think that for now, they are best housed down south. But, it’s important to return knowledge to the communities, and good replicas are the best thing we have for sharing artifacts around—some Elders can’t even tell the difference! The MacFarlane Project can lead students into learning about science and archaeology— we never had that when I went to school. Young Inuvialuit students will have the chance to investigate our website, and it will be of great benefit to them, showing them what we used to use, how we made things, how we lived, etc. They can go to school and become archaeologists themselves. I’m really happy I’m part of this project. It makes me feel good that I’m doing something good for my community. My goal is to see this through from the beginning to the end.” 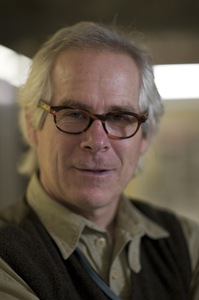 Stephen Loring: “As a Smithsonian curator there is no greater honor or responsibility than that of caring for and respecting the cultural treasures in our custody. Even the most mundane objects —a dull knife, a broken doll, a harpoon head or stone pipe—carry stories of long-ago days and bare witness to the lives of extraordinary people if only we know (or learn) how to listen. The Inuvialuit material that MacFarlane was able to assemble is a unique and priceless legacy that attests to a powerful and ancient way of life when human beings and animals and the land they shared were much more attuned to one another than they are today. These old things really are gifts of the ancestors and they serve as a powerful means of connecting the past with the present and the future. My colleagues and I are tremendously honoured that such a distinguished group of Inuvialuit elders, scholars and young people would come to Washington to share with us their knowledge and appreciation of the collection. It is hard to imagine that the Inuvialuit that worked with MacFarlane to assemble the collection could have imagined the importance of it for their descendants more than 150 years later. We hope that this is the beginning of a new era of cooperation and interaction between Inuvialuit leaders, educators and community members and the Smithsonian in exploring the significance and meaning of the Inuvialuit collections at the Smithsonian and furthering an understanding and appreciation of their history, culture and homelands.”