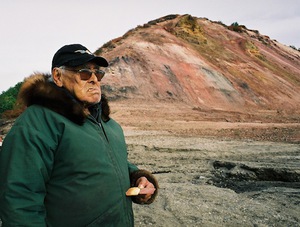 In this section you will find images, maps and other information about the Anderson River area and the Inuvialuit who lived there when the Hudson's Bay Company's Fort Anderson trading post was in operation. You can learn about Fort Anderson, and about Chief Factor Roderick MacFarlane, who collected cultural objects at Fort Anderson. Information also is provided about Father Émile Petitot, a Roman Catholic missionary who wrote eyewitness accounts of some of those objects in use, and about Vilhjalmur Stefansson, an anthropologist who lived amongst Inuvialuit in the early 1900s when knowledge of traditional tools, technologies and life ways was still strong. Maps of the Anderson River region include Inuvialuit place names collected by the Inuvialuit Cultural Resource Centre that indicate significant locations of ongoing interest to Inuvialuit communities today.