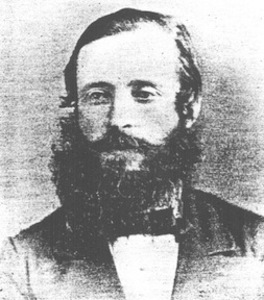 Roderick Ross MacFarlane was born in the outer Hebrides Islands, off the coast of Scotland, in 1833. He joined the Hudson’s Bay Company (HBC) as an apprentice clerk in 1852, when he was nineteen years old. He was sent overseas, travelling by ship to the Hudson Bay, and then overland and by river routes to the Great Slave Lake area where he was put in charge of a trading post at Fort Rae and later at Fort Resolution. In 1854 he went further north to Fort Good Hope, and ran that post until 1861. That year he was assigned to manage the Fort Anderson trading post, which he had been put in charge of building while still managing the Fort Good Hope post.

MacFarlane had high regard for the Inuvialuit who traded at Fort Anderson. In one report, he described them as “tall and well formed, active in their movements, lively in their conversation, good-humoured, with smiling open countenances” (MacFarlane 1890-91:34). He in turn appears to have been respected by the Inuvialuit, who called him 'Mitchi Paloum' (Mr. MacFarlane).

MacFarlane was an ardent collector of cultural and natural history specimens for the Smithsonian Institution. He received inspiration and training from Robert Kennicott, a naturalist working for the Smithsonian who travelled to northwestern Canada to acquire cultural and natural history specimens. MacFarlane encouraged Inuvialuit to bring artifacts and other specimens to the post, and he went on a lengthy collecting trip - with eggs as a major objective - each year from 1862 through 1865. He spent the long winters at Fort Anderson packing the collection and writing notes. The following spring the collections were shipped out through Fort Good Hope to catch the fur shipments going south, eventually reaching up the Mackenzie River system to Methye Portage and then to the Red River and the railhead at St. Paul for forwarding to Spencer Baird at the Smithsonian Institution in Washington, D.C.

MacFarlane argued unsuccessfully against the closure of Fort Anderson, and was concerned for the fate of the Inuvialuit who had come to rely on the goods they could obtain there. He remained in the north for some years as Superintendent for the Mackenzie District, later moving to other places and positions for the HBC. He retired to Winnipeg, Manitoba in 1894 and died there in 1920.